Bringing new ideas to the table

Repairing all makes and models of AC units

Landsborough is a town and a locality in the Sunshine Coast Region, Queensland, Australia. In the 2016 census, Landsborough had a population of 3,812 people.

Landsborough is in the Sunshine Coast hinterland. It is situated north of the Glasshouse Mountains just off Steve Irwin Way, 82 kilometres (51 mi) north of Brisbane at the base of the southern end of the Blackall Range.

Landsborough is situated on the North Coast railway line from Brisbane and there are several services daily southbound to Brisbane and northbound to Nambour and Gympie. It is one of the main rail/bus interchanges for TransLink bus services to the Sunshine Coast.

The Bruce Highway passes along the eastern boundary of the locality. 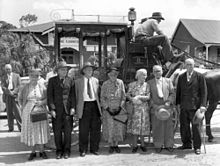 North Coast pioneers standing near Cobb & Co coach outside Landsborough Shire Chambers, which was then located on Landsborough Maleny Road

Landsborough was named for the British-born explorer William Landsborough, who was the first European to cross Australia north to south. The earliest European settlers arrived in the area in 1871. Originally called Mellum Creek (“mellum” is an Aboriginal word for “volcano”), it dates from 1871 when Isaac Burgess erected a slab hut with bark roof as “port of call” for Cobb and Co coaches stopping for refreshments and a change of horses.

Mellum Creek Post Office opened on 23 January 1881. It was renamed Landsborough in 1890.

In the past Landsborough was one of the larger towns of the Sunshine Coast having a large logging industry.

The Landsborough School of Arts Memorial Hall was celebrated with a stump capping ceremony on 24 November 1923 involving Member of the Queensland Legislative Assembly for Murrumba, Richard Warren. The hall was officially opened on 4 May 1924 by Queensland Governor, Matthew Nathan.

St John’s Anglican Church was dedicated on 13 October 1956 by Archbishop Reginald Halse. It closed circa 1987. The building was sold for removal.