To make sure your air conditioner lasts a long time and you get the best of your money worth, we want to present you with our services. Not only do we offer competitive prices, but we also ensure the material we use is of excellent quality.

We make sure that our services are based on your needs. Things that fit your aesthetic. To make our services as good as possible, we want to consider your styles and perspective on everything before we start our installation process. With us, you are our priority, and we want to make sure we don’t let you down.

Trust us to make your life more comfortable in no time.

This is where we come in. We always deliver an excellent repairman to your doorstep who knows his way around any AC unit installed. It genuinely does not matter what you bought 20 years ago. We can fix it all within no time. Our repairmen are also very quick when it comes to finding faults in any AC units which are installed in your home.

To add to the convenience, we have our contacts well made with the best whole sellers and manufacturers. We give you the best services that we can offer while keeping things budget-friendly. We don’t want you spending more than you need to for something that simply requires a little repairing.

We always ensure we get to the root of the problem instead of just fixing it for the short term.

If you never noticed, we will bring it to your attention. The fact that AC systems are prone to drawing in certain molds, bacterias, and even fungi. Something about the humidity and the damp environment makes such things an oasis to bloom off of.

Not only do these fungal materials make you sick through the air it also makes the appliance suck in more electricity since a lot of the motor and the interior workings are choked up and need cleaning.

To fix this problem, you should call “Brock from Buderim” to help you and your appliance work for a long time.

To maintain HVAC&R systems, make sure you’re keeping up with the minor things. Minor in-house cleaning and such can always be a great help.

Buderim (/ˈbʌdrəm/ BUH-drəm) is an urban centre on the Sunshine Coast, Queensland, Australia. It sits on a 180-metre (590 ft) mountain which overlooks the southern Sunshine Coast communities. In the 2016 census, the urban area of Buderim had a population of 54,483.

The name “Buderim” is usually believed to be derived from a local Kabi Kabi Aboriginal word for the hairpin honeysuckle, (Badderam) Banksia spinulosa var. collina. However, as the environment on the mountain before British occupation was one of dense rainforest not Banksia heath, the name may have come from the Yugambeh word budherahm meaning sacred or spiritual.

The town of Buderim is not strictly bounded, but as at the 2011 census the Australian Bureau of Statistics classifies Buderim based on the boundaries of the following suburbs:

Historically, until the 2001 census, a section of Buderim within about 1 kilometre (0.62 mi) of Sunshine Motorway, as well as Mountain Creek, were considered parts of the neighbouring Maroochydore urban centre.

Team of bullocks hauling a wagon of logs in Ballinger Crescent, 1927

Buderim is an Kabi word meaning honeysuckle or red soil. The name is also said to come from a Yugambeh word Budherahm, meaning sacred or spiritual.

In 1862, Tom Petrie set out from Brisbane with 25 Turrbal and Kabi Kabi men including Billy Dingy and Wanangga to search for cedar in the Maroochy area. They ascended Buderim mountain where they saw forests of fine timber, then had the satisfaction of being the first to cut a cedar tree there.’ Buderim was seen as a resource for timbergetters, as huge stands of Beech and Australian Red Cedar grew across the mountain. Some trees were so large they were wasted due to the lack of transport to carry them down to the river for despatch to Brisbane. Once clear felled, the plateau was used for farming. The rich red volcanic soil found on Buderim made the area particularly suited to growing almost everything, from bananas to small crops. The most notable were coffee and (in the 20th century) ginger, the crop which made Buderim famous. The farming pioneer Burnett won awards for the quality of his coffee at shows in London during the late 19th century.

On 5 May 1917 Reverend C. Tunstall (Vicar of Maroochy) performed the stump capping ceremony for the new Anglican church. St Mark’s Anglican Church was dedicated on Saturday 25 July 1917 by Bishop Henry Le Fanu. It was rebuilt and re-dedicated in 1988.

In the middle of the 20th century the largest ginger processing facility in the southern hemisphere was built, and operated as the Buderim Ginger Factory until 1980 when operations were moved to a new facility near Yandina. As the value of their produce was eroded, many farmers left the land to find work elsewhere.[

The Buderim War Memorial Hall and Library was extended in 1966. The extension provided space for the Buderim branch of the Queensland Country Women’s Association which moved into the extended facility.

In 2011 the average value of Buderim real estate was $475,000 and, largely due to its altitude, its proximity to the Sunshine Coast beaches and its pleasant climate, has increased to $595,000, and this has pressured many others out of the rural lifestyle, as housing development increased in and around Buderim Mountain. Thanks to the huge leap in real estate values during the first decade of 2000, steep land was developed that was previously deemed too expensive to engineer for housing. Due to these developments, the remainder of the farming land and much of the secondary growth rainforest on the escarpment has disappeared. Substantial rainforest remnants remain, especially in the protected area known as the Foote Sanctuary which provides well-maintained public walking paths and BBQ facilities. There is also access to the Buderim Falls. The area is home to an abundance of native wildlife, notably king parrots and lorikeets. Brush turkeys are also a common sight, as are families of kangaroos and wallabies.

Nowadays, the Mountain is notable for the enormous variety of its architectural styles, which range from the classic ‘Queenslander’ to ultra-modern one-off designs. Some homes, especially those ‘on top’ with ocean views, sell for seven-figure sums. One celebrated ‘mansion’, straddling four blocks, has recently been on the market for ‘offers close to $20 million’. 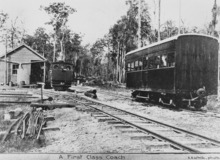 Buderim contains a significant heritage relic of the early days in the form of Pioneer Cottage, restored and cared for by the Buderim Historical Society.

Between 1914 and 1935 a small gauge railway ran from Buderim to Palmwoods, to take produce from Buderim farms to market. The railway was closed down in 1935 when improved roads and truck transport made it economically redundant. A substantial section of the old track has been cleared and now provides a fine scenic walking trail running parallel to Mons Road. The magnificent old Krauss steam locomotive which previously hauled the carriages along this track is currently undergoing restoration and is planned for public display in the centre of Buderim, when sufficient funds are raised.

Along with a number of other regional Australian newspapers owned by NewsCorp, the Buderim Chronicle newspaper ceased publication in June 2020.